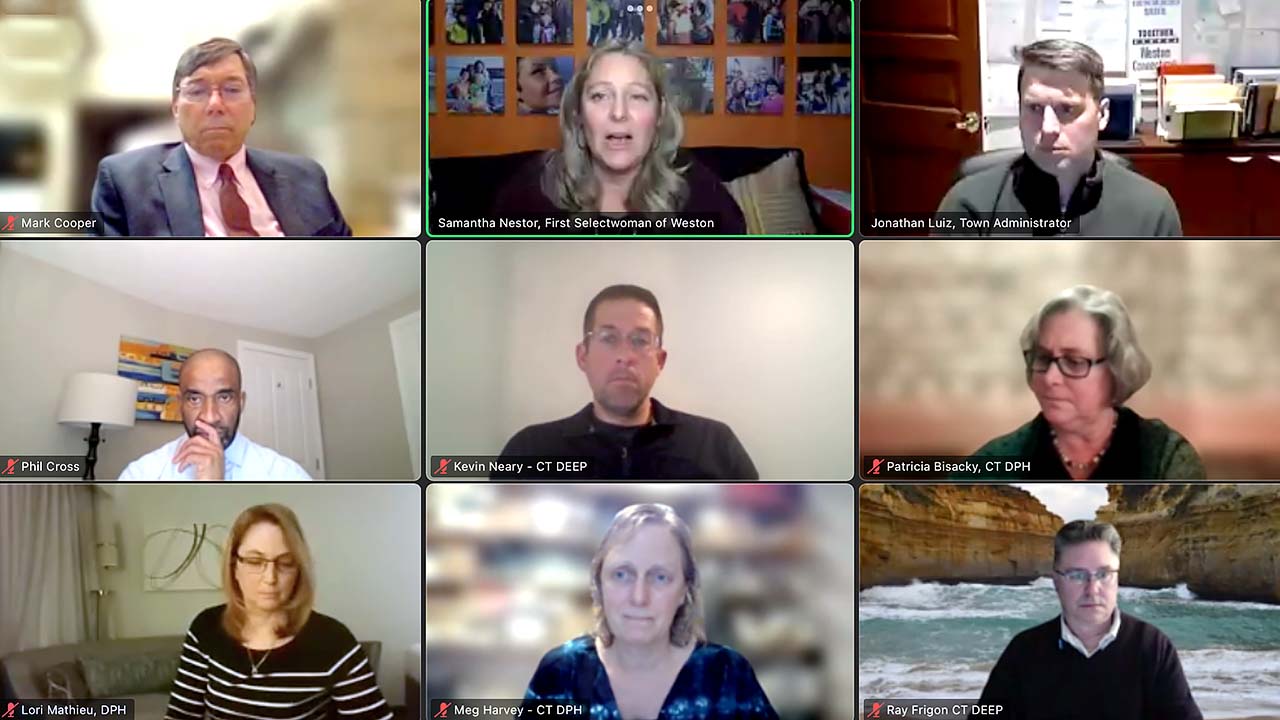 A video recording of the session, which ran 90 minutes, can be viewed here.

Here are some takeaways:

Water in both affected wells meets state and EPA standards

That is to say, according to Meg Harvey, an epidemiologist with the Department of Public Health, the water meets standards “for the chemicals that have standards.” That does not include PFAS, for which there are no standards. Ms. Harvey said the science is evolving.

However, both the EPA and DPH have guidelines for levels of PFAS that can exist without provoking action. Test results from both Weston wells are within the acceptable range of those guidelines. Oddly, the well with the higher levels of the two has not been used for a while.

DPH Public Health Section Chief Lori Mathieu said she expects both the EPA and the state will set standards for maximum PFAS toward the end of the year. Limits in a number of states are significantly lower than those in current EPA and Connecticut guidelines.

How did PFAS get into the water?

No one knows. But Ray Frigon, an environmental analyst with the Department of Energy and Environmental Protection, said it is his department’s job to find out. If it can be found out.

Shannon Fociu, Mr. Frigon’s colleague at DEEP, described some of the many, many everyday items that contain PFAS. Mr. Frigon said the presence of the chemicals in Town wells could be a “background condition,” a result of the accumulation of anything from the disposal of cosmetics to the use of fabric softeners and floor wax in the surrounding area. Mr. Frigon said there may not be a single, discrete source.

Can private wells be tested?

Patricia Bisacky, a DPH drinking water analyst, said that a state-approved PFAS test kit is available to homeowners. The tests are complicated, she said, and only one lab is certified by the state to process them.

The Aspetuck Health District, according to director Mark Cooper, has test kits available at a cost of $250.

Ms. Bisacky said water found to contain PFAS can be treated. She said boiling is not a solution, and could actually create a greater concentration of the chemicals.

The solution is filtration. First Selectwoman Nestor said a filtration system will be installed at Weston’s pumping stations, has already been designed, and is currently being tested. Until installation is complete, bottled water will be used for drinking and cooking at school district and Town facilities.

Ms. Bisacky and Ms. Mathieu emphasized that homeowners should regularly perform conventional tests on well water, including for potability, arsenic, and lead.

Currently, there are no state requirements to test private wells, said Ms. Mathieu. She noted that a proposed bill pending in the legislature would require testing at the time a property is transferred.