“The Year of the Black Water Tiger” 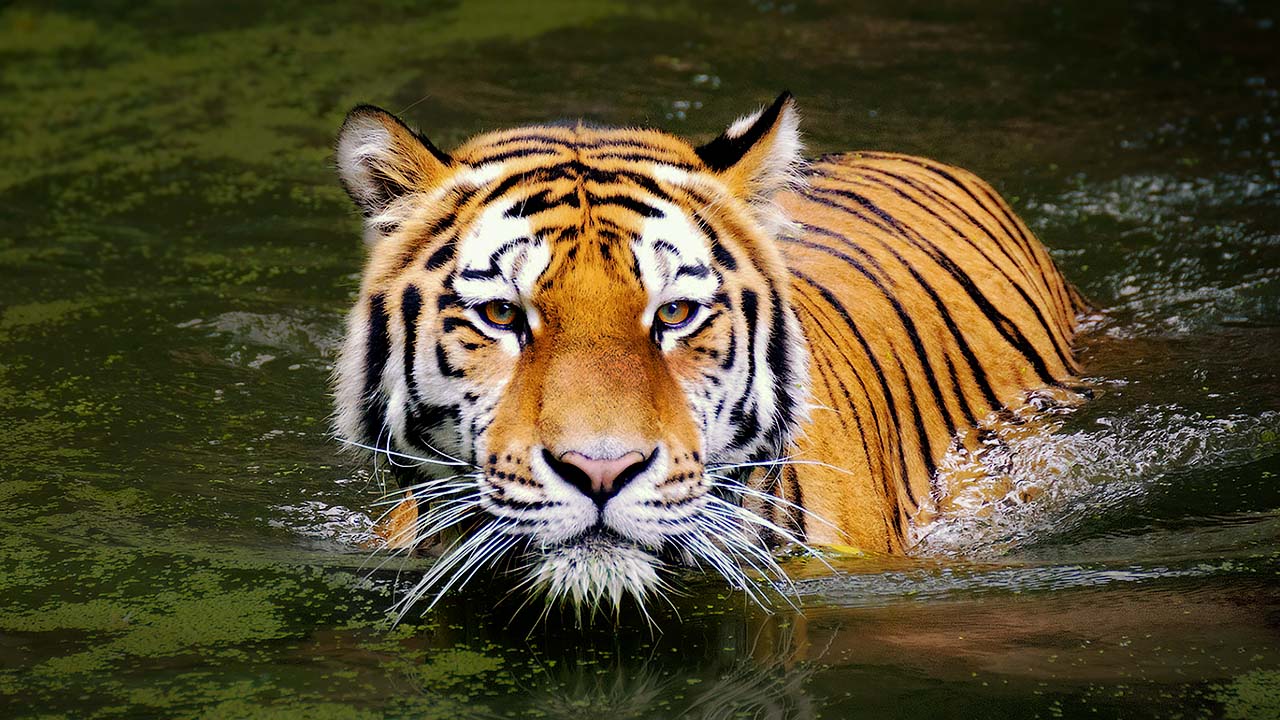 The Year of the Black Water Tiger
A story inspired by old Korean folk tales
by Y.S.

In a time when tigers smoked, there lived a little girl and a little boy who lived in a little village called Yehsan.

This village was perched on the edge of a cliff between two tall mountains. An ancient pine tree grew out of the side of the cliff snaking its way with twisty knotted branches and pointy needles. At the bottom of the cliff, a large lake slumbered next to a pebble beach.

Once a week the grandmother walked down the mountain to the market to sell her rice cakes. While she was gone, the girl and boy played yutnori with the other children. The children took turns at the game board as they threw the small sticks in the air and laughed as it clattered to the ground.

The children also took turns on a large wooden seesaw, leaping high into the air and twisting and turning in somersaults. In the air, they could see past the grey and drab village walls and catch glimpses of the glittering lake down below.

Now the stories go that every sixty years, a tiger would walk out of the lake.

The children hadn’t ever seen this tiger, but their grandparents had, and the village was abuzz discussing what to do when the tiger left its lake home.

I heard he’s as big as ten horse carts!

I heard his roar can cause an earthquake!

I heard he can eat up five big men all at once!

In the morning, the grandmother set about leaving for the weekend market.

“Off I go children. I’ll be back later tonight. Come back inside and lock the door once the sun goes down,” she said. She hitched her large pack filled with rice cakes onto her back and kissed her grandchildren goodbye.

The girl and boy decided to climb on the old ancient tree to pass the time and ran to its knobby branches that reached out across the lake. Feeling the tough rough bark under their knees and hands, they moved to a small nook that was just large enough for both of them.

It is said that the tree will sometimes talk to people it deems worthy and many villagers had gone to its branches in search of a nice conversation. But the tree never talked.

The girl and boy sat admiring the beauty of their village and land.

“If only we could stay like this forever,” the girl said.

“Nothing is forever,” said the boy.

“I want halmuhnee to live forever,” the girl said.

They fell silent listening to the blackbirds sing its warbling song.

As the sun began to set, they saw a small ripple form in the center of the lake. The ripple grew larger and wider, and a wake of water moved towards the beach. The children looked at each other with large eyes and thumping hearts and looked down at the lake.

The wake got closer and closer until two black ears, then two large eyes and then the top of the tiger’s head rose above the water, revealing a muscled, striped body and paws the size of boulders.

The children clutched each other in fright.

“The black water tiger is out,” they said.

They scrambled out of the tree as fast as they could and raced towards the village yelling, “he’s here. He’s here. The black water tiger is here!”

The alarm bells in the village started ringing.

The women and men gathered their weapons.

The elderly and children hid in their houses.

From the village, the girl and boy and all the villagers felt the ground tremble and trees shake as a ROAR filled the evening air.

The villagers fortified their walls ready for battle and their knees knocked against each other because they knew they could not stop this black water tiger from eating everyone up.

The tiger had been asleep for sixty years, so he was bound to be very hungry.

The villagers quailed in fear as the echoing thud of the sulunking tiger's footsteps drew nearer. The girl and boy saw their grandmother coming up the path from the market. Her shoulders slumped low and she looked sad. The girl and boy could see that she had not sold any of her rice cakes. They wanted to run to their grandmother, but a man stopped them saying, “you can’t go to her now. The tiger is coming.”

“But she will get eaten by the tiger,” the children said. Tears overflowed down their face. They watched with aching hearts as she got closer to the village, but then the aching turned to terror as they saw the tiger loomed larger behind her with a methodical thud, thud, thud.

The villagers closed their eyes. A woman screamed and fainted. The girl and boy quaked with fright. Their skin felt hot like a thousand needles were poking it and their hair stood on end.

Now children, if you’re reading this and you’re frightened and don’t think you can continue, please do. Have courage. Because courage is what you need to make a difference.

The girl and boy looked at each other and nodded. They felt angry at the man for stopping them from helping their grandmother. They took a deep breath, held hands and ran to save their grandmother from the terrible tiger.

Or was he so terrible as everyone thought?

Children, in the Korean zodiac, the tiger is an animal that is, at its heart, a fierce and loyal protector.

In a low and rumbling voice, the tiger said, “I have been waking up every sixty years for thousands of years and this village is still the same,” the tiger said.

“Every sixty years, different villagers have grown up. But everyone is always the same. You must help each other. Uplift each other. Not tear each other down,” the tiger continued.

The tiger watched the villagers to see what they would do.

“Why make the same mistakes again?” the tiger asked. The villagers shook their heads and looked at one another. They finally saw what the tiger saw — a sea of grey and drab except for the sun-specked tiles.

“Do not be afraid to show courage,” the tiger said. “Come help.”

The tiger roared. The color started from where he stood and crept towards the village. The trees and grass exploded in all shades of green. The huts now imbued with the tiger’s magic glowed a golden hue as if lit from the inside. The villagers’s clothes sparkled in a rainbow of rich pigments.

“You showed courage, little girl and little boy,” the tiger said has he crouched low to meet their height. “Now go and speak with the ancient pine tree. Continue to show courage. My spirit will stay here to protect you and your village.”

The little girl and little boy ran off towards the pine tree and were seen chatting with the ancient pine until the stars winked and blinked in the sky under the new moon.